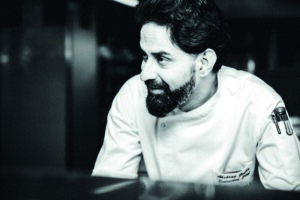 Executive Chef Akshraj Jodha is proud of his culinary heritage

In a conversation about the cuisine of Rajasthan, it’s impossible to ignore several centuries of Rajput history or Chef Akshraj Jodha’s ancestry that stretches back to the legendary Rao Jodha, the founder of Jodhpur. Currently the executive chef at the ITC Windsor, Bengaluru, Chef Jodha had his sights set firmly on entering the National Defence Academy – a career his warrior ancestors would probably have approved of thoroughly – when circumstances conspired to send him to the Institute of Hotel Management, Mumbai, and from there, into the five-star kitchen as a professional chef. A formative stint at the Taj President, Mumbai; a coveted apprenticeship under Chef Imtiaz Qureshi; a short time in Malaysia, and several years of experience all led him back to exploring and promoting his own culinary heritage.

The 84 villages of Akheraj Deolia, Ajmer, the seat of the lineage founded by one of Jodha’s ancestors, flanked by historic Marwar and Mewar, produced a cuisine influenced by its unique geographical and political history. This was the starting point of Chef Jodha’s journey into the cuisine of royal Rajasthan. It came with a few challenges: India’s royal tradition was one where cooks to at State kitchens often bore the title of the quantity and exclusivity of the dish that they prepared – a 200-person Pulao cook, for instance. Dishes unique to a family were prepared in several stages by different cooks, so that no one person was able to master the complete technique, and several custodians of ancient cooking techniques took their secrets with them. So, for Chef Jodha, procuring a recipe was sometimes complicated.

Rajasthani cuisine is a very general term. Would you say that the cuisine is perhaps not as well-known as is generally thought?
There is really no, one unified cuisine that can be called Rajasthani. Each state, each area has its own way of making certain dishes. For instance, lal maans, gatta, ker sangri are all common dishes, but the recipes differ slightly according to where they are made. Then there are ingredients that are common, based on the terrain and climate: dehydrated vegetables; dried watermelon rind; channa dal (split chickpeas), besan (chickpea flour), kachri, used as a tenderizer as well as a vegetable — all important elements in an arid environment, as they were long lasting. Rather than water-based gravies, ghee, onion, garlic and yogurt were worked into curries. Many dishes, such as junglee maans, were created around the extended hunting season which could last up to three months.

How do you select the dishes that you present? What is the focus of your menus?
I have drawn on the food of Akheraj Deolia and the focus is on the region. Ajmer is situated between Mewar, Marwar and Jaipur. We incorporate the produce of each of these distinct regions into our own cuisine. For instance, maize and amla, grown in Mewar, and bajra from Marwar are both used in our cuisine. In addition, Ajmer was unique historically, as its 16 major lineages were directly under the rule of Delhi. So the influences were syncretic: the Mughals, Jaipur, Jodhpur and Udaipur all influenced our food. Marriage alliances amongst royal families across states played a role too. My grandmother was from Gujarat, so there is a family preference for lightly sweetened dishes.

You have developed five- and seven-course menus to showcase the food of Rajasthan. What are some of the dishes that you serve?
A menu might include maans tikka bootan (lamb marinated and cooked over an open fire); akhi bater (quail
marinated in spices) and hara maans (mutton in spices and betel leaves). There are several vegetarian dishes like pithod (yogurt and chickpea flour cakes in a gravy) and the unusual chakki sholla (wheat gluten kebabs on skewers). This involves a lost technique from Jodhpur, where wheat gluten is painstakingly extracted to create a texture that is close to meat. Of course, there is always dal baati choorma.

How did you collect recipes? Did you have to work them out for yourself or did people also invite you into their kitchens and demonstrate them to you?
Most of the recipes are inherited, many of them collected from my mother. Some of the dishes, such as matki maans – meat cooked in a clay pot and topped with marinated mince – came from old staff who have been with my family for years. Family connections have also helped in putting together dishes. Extended family members have invited me to royal kitchens and shared recipes. 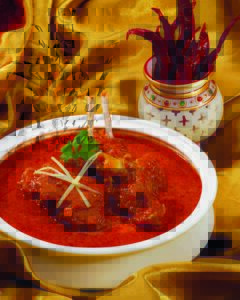 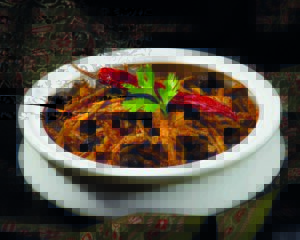 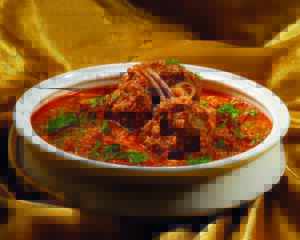 Are there some recipes that ‘got away’, which people may not have been willing to share?
There are many recipes that are difficult to re-create, despite the dishes looking deceptively simple. Families are reluctant to part with specific details. Fortunately, there are also several dishes that are well-known, even though there may be slight differences in the way they are made, such as gatta and pithod.

Red chillies are central to many dishes. Which is the preferred variety of dried red chilli that defines the cuisine of Rajasthan?
Several varieties of red chillies are grown all over Rajasthan. But the ones that come from the village of Mathania near Jodhpur are valued for their bright colour and spice levels.

While exploring and developing recipes, did you get to see any old recorded recipes in books with any of the royal families and include any of the dishes in your menus?
I spent quite a lot of time in Jodhpur, where I was working at the ITC Welcome Hotel. I used to visit Mehrangarh Fort very often and through INTACH, I managed to get some recipes based on old records. Most of them were for wild game, so they could not be reproduced. However, khad khargosh – rabbit cooked in a pit – has found its way on to my buffet menu, as farmed rabbit is available. I also received a beautiful book on the royal cuisine of Kota from one of my maternal uncles who belongs to the Kota royal-family. It was written in Hindi in the 1920s, and has recipes for a range of pulaos, special rotis, dals and kheers of every description from Kota, as well as some from Madhya Pradesh.

Which is the cuisine that you enjoy cooking most, apart from Rajasthani?
I love cooking regional cuisines and try to promote them. Some of my favourites are Gujarati, as my
grandmother was from the Gujarat royal family. The food of Himachal is very interesting, especially Dham
cuisine, the elaborate vegetarian feasts cooked by priests for celebrations — and I really like my pandi curry!

Previous ArticleBUILT ON SALT, RUN ON WINE
Next Article From the Editor – 20 wines to try in 2020