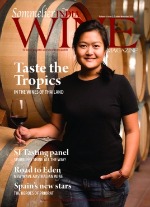 Magazines, journals, indeed all periodicals, evolve with time while maintaining an overall identity. They aren’t static or fixed in time and place. In this, they are very much like good wine which continues to grow and change even in the bottle. With this issue, SI makes a break with tradition by putting a person on the cover for the first time. Nikki Lohitnavy is Thailand’s first female winemaker and an oenologist at her parents’ GranMonte vineyard in Thailand. Continue reading Reva K. Singh’s Editor’s Note which discusses the contents of the latest issue of Sommelier India.
Subscribe to Sommelier India and receive this special issue at your doorstep. Sommelier India is written by some of the best wine writers in the world and targets Indians who enjoy wine and the good life. For iPad or Android subscriptions, go here.

China and India are not the only wine producing countries in Asia, Japan is another (See SI, April- May, 2013, “In The Shadow Of Mount Fujiyama”) and even Myanmar is now producing wine. Joel Payne’s piece on page 24 provides a good overview of the Thai wine industry.
While countries in Asia are new to wine, the old world has been producing wine for centuries. I was in Catalonia earlier this year and was intrigued by the story of Priorat wines. The Priorat, a small wine-growing area in the north of Spain, has been producing wine for eight centuries! The region is on par with Rioja and has become better known in the last decade or so after the introduction of modern winemaking technologies. French wine grapes along with the local varieties have been used since the early 1980s. Deep red, intense wines of exquisite quality, the new Priorats have received worldwide acclaim. The quality of these wines, whether traditional or new style, is founded in a unique soil and microclimate.
Another recent wine producing success, from the other side of the world in the Stags Leap district of Napa Valley in California is Shafer Vineyards. Anne Krebiehl interviews Doug Shafer on the launch of his book and learns what it took to reach where they are now as producers of prestigious Napa Valley wines. (See “The Grind behind the Glamour”, page 54). With no knowledge of wine whatsoever, Doug’s father decided to up sticks and move the family from Chicago to Napa and make a go of it in the fledgeling wine industry. Doug was only 17 years old at the time and says, “My father was not a wine aficionado – he was bourbon and beer.” Families like these are true pioneers.
On September 21, SI celebrated International Grenache Day, a varietal that is still not that well known in India. It forms part of the blend of many great wines such as Côtes-du Rhône, Châteauneuf-du-Pape and most rosés, and of course, Priorat, where the grape (known as Garnacha) is a native. I was at the first Grenache Symposium in June 2010 at La Verriere, Crestet, Rhône Valley (as was Michael Fridjhon) where delegates highlighted its defining features. Michael’s article here about its shifting fortunes is illuminating.
As always, our columnists, Jancis Robinson, Steven Spurrier and Raghu Bahadur never fail to capture readers’ interest with their wide-ranging stories. You’ll find much to dip into as well as mull over in these pages. Meanwhile, I look forward to your lively responses.
Subscribe to Sommelier India and receive this special issue at your doorstep. You can also find Sommelier India in the Apple or Android App Stores now if you would like to subscribe and view the magazine on a tablet device.