Sweet wines don’t get the appreciation that they so richly deserve, writes Jancis Robinson, and urges us to try them with no preconceptions 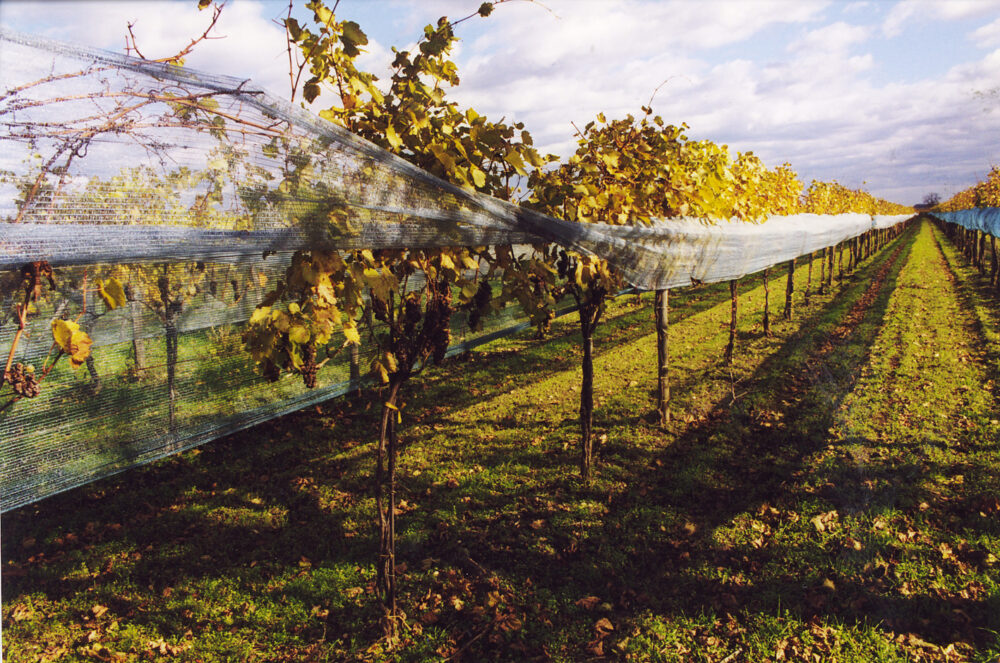 The shores of Neusiedlersee lake in Burgenland, Austria, have perhaps the greatest concentration of botrytised wine production in the world

Not much about wine makes me sad, but the average wine consumer’s attitude to sweet wines does. Good sweet wine is probably the most difficult and expensive wine in the world to make, yet so many people turn up their noses at the idea of sweetness in wine.
This is usually because all they have tasted are poor quality sweet wines that owe their sweetness simply to added unfermented grape juice, or very ordinary commercial wines, of all colours, that have had some sweetness added to make them more palatable. And as they learn about wine, they are taught to be rather snooty about any wine that is not perceived as ‘dry’ (however much sugar may be there in fact).

The crucial dynamic in sweet wines is the balance between the sweetness and acidity. A wine high in unfermented sugar needs lots of acidity to counterbalance it and prevent it from tasting sickly sweet. You can make good sweet wine from grapes that have frozen on the vine so that both grape sugar and natural acidity are concentrated in the juice pressed from them – leaving the frozen water behind.

Or, in a benign climate without autumn rain, you can simply leave the grapes on the vine, sometimes cutting the canes of the vines so that the grapes shrivel and the water evaporates. If there is a risk of rain, you can pick the grapes and dry them indoors, either hanging from the rafters in a well aerated chamber or, more commonly, on shallow trays. These dried-grape wines date from antiquity and are still made all over Italy and Greece. The rich Amarones that have virtually taken over red wine production in the Valpolicella region are made harnessing this technique.

But the most intriguing, expensive and time-consuming way of making sweet wine is from fully ripe grapes affected by the disgusting-looking grey furry mould known variously as botrytis cinerea and noble rot. This needs alternating sunshine and moisture (showers or dew) and is pretty picky about where and when it proliferates. The top producers in Bordeaux’s sweet white wine communes of Sauternes and Barsac may have to send pickers through a single vineyard up to 10 times, each time picking only selected bunches or, often, selected berries! They often have to clean off and throw away any berries that have been affected by the ignoble form of botrytis, the grey rot that literally rots rather than concentrates the grapes.

Each lot of grapes, Sémillon with some Sauvignon Blanc, needs to be processed and pressed separately so that it’s all incredibly labour-intensive – and so much more costly than making a red bordeaux that it always strikes me as so unfair that sweet white bordeaux is so much more difficult to sell that its red counterpart. 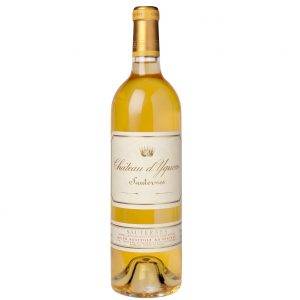 A bottle of Château d’Yquem Sauternes

The team behind Château Lafite, for example, have been in the habit of bundling cases of their Sauternes Château Rieussec with orders for Lafite. This, when average yields in Sauternes can be as little as 10 hl/ha, when those for red wines are likely to be four or five times as high. Perhaps the problem is the general perceptions that sugar is unhealthy (although wine lovers tend to consume vast quantities of fermented sugar in the form of alcohol anyway), and that sweet wines should be drunk only at the end of a meal.

I once had lunch at Château d’Yquem, the most famous (and largest) Sauternes estate of all, with the then-owner, Comte Alexandre de Lur-Saluces. He made his point about the versatility of his sweet wine at table by serving it throughout the meal, various vintages with an onion tart, richly sauced chicken, Roquefort and a fruit dessert. Just thinking about the glories of this golden liquid makes me want to get up from my desk and find a half-bottle immediately.

The wresting of this family property from the Lur-Saluces family by the luxury conglomerate LVMH is a bitter memory for Alexandre and his son Philippe now, but they concentrate their energies on another Sauternes property Château de Fargues. Philippe is an amusing speaker still hopeful, as his father was when I first met him 35 years ago, that one of these days sweet wines will become fashionable again, as they have so often been in the past.

“You can damage Sauternes with red meat and green vegetables,” Philippe admits, “but otherwise you’re ok. White meat and shellfish are great with our wines – and anything you can cook sweet and sour. Or as an aperitif. And they’re great with oysters.” 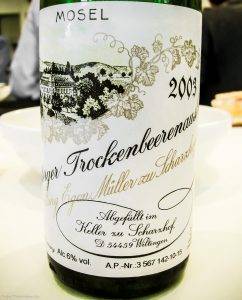 But much more expensive than even Château d’Yquem are the most treasured botrytised wines of Germany – particularly the rarest Riesling Trockenbeerenauslen of Egon Müller on the Saar, a tributary of the Mosel. According to winesearcher.com’s list of the 50 most expensive wines in the world, only Domaine de la Romanée-Conti’s Romanée-Conti is more expensive with the average price of an Egon Müller Scharzhofberg TBA being well over US $9,000 a bottle.

Unlike their counterparts made on the banks of the Rhine, nobly rotten Mosel wines date only from 1921, and Egon’s father made his first TBA from the famous Scharzhofberg vineyard as recently as 1959. He had to wait until 1971 for the grapes to be sufficiently affected by the noble mould for a second TBA to result. Different versions followed in 1975, 1976, 1989 and 1990. “And nowadays, thanks to global warming, we make a TBA every other year more or less,” says Egon Müller, adding disarmingly, “but they are still so rare [in 1990 they made just 120 litres of TBA] that everyone wants them. If we put TBA on a label, we sell it easily.”

The region with the longest documented tradition of making botrytised wines is Tokaj in northwest Hungary where they date from at least the mid 17th century. But just across the Austrian border on the shores of the shallow Neusiedlersee lake in Burgenland is perhaps the greatest concentration of botrytised wine production in the world. The morning mists off the lake actively promote the spread of noble rot that is so prevalent and reliable that Gerhard Kracher routinely makes about 10 different TBAs every year, numbered to indicate increasing sweetness.

But the extraordinary thing is that the world has known about them only relatively recently. Gerhard’s grandfather Alois was a talented vine grower who founded the house only in 1958. It was his exceptional winemaker son, another Alois, who saw the potential for botrytised wine from his father’s vineyards. From the 1980s he waged a campaign to make the world aware of these luscious treasures from Burgenland, from grapes such as Welschriesling, Scheurebe and Chardonnay. I remember his coming to London as early as the 1980s to defiantly show a range of them alongside Château d’Yquem. They may not last as many decades as Yquem but they are glorious for many, many years.

And then there is the unexpected pocket of botrytis in the unglamorous irrigated inland region of Griffith in New South Wales where back in 1982 Deen De Bortoli managed to transform surplus overripe Sémillon grapes into what is now recognised as Australia’s iconic sweet white, Noble One – perhaps the best-value botrytised wine in the world.
Please try it, or any sweet wine – with no preconceptions.

This article is taken from Sommelier India June July 2016