Table set for a Wine Appreciation Evening at The Trident, Gurgaon, for The Wine Society, Delhi

The Wine Society, Delhi, is on a roll. And its members couldn’t be happier. After a splendiferous event last month at En, the Japanese Restaurant, on the last Sunday before Christmas members were treated to a brilliantly organised and curated Wine Appreciation evening at The Trident, Gurgaon, writes Bunny Suraiya.

We gathered in the verandah outside the Cilantro at the The Trident, where three long tables were attractively laid with festive red linen and seven wine glasses (three for whites and four for reds) on individual place mats thoughtfully printed with the name of each of the wines that was destined for each glass – an innovative method to avert confusion in the mind of the appreciative wine drinker. Welcome flutes of Chandon bubbly greeted us as we arrived, and those who were smart enough to get there early, got seconds and thirds of this most delightful of Indian sparkling wines that must not be called Champagne, but certainly tastes just like it.

Once everyone was present and accounted for, the serious business of the evening began, with the serving of the first wine, Beach House Sauvignon Blanc 2014. The Sommelier Rakesh Awaghade, who took up his assignment as head Sommelier at the Trident and the Oberoi after several years at one of Gordon Ramsay’s fabled London restaurants, was concise and informative about the wine and its provenance. 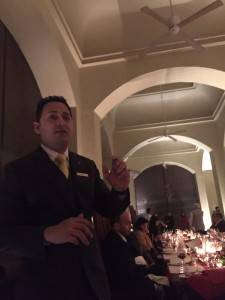 Sommelier Awaghade’s expert knowledge added to the pleasure of drinking this wine as well as the eight others that followed. The next two whites were the Principesco Pinot Grigio 2013 and the Bodega Norton Chardonnay 2014. Opinion was divided among the members, with some preferring the Sauvignon Blanc while others stoutly defended the Pinot Grigio. It was a tie, with the Chardonnay coming a close third. It is common knowledge that wine tastes better with food (and of course food tastes much better with wine), so to accompany these wines were Macchi tikka and indivdual little bowls of chicken mac and cheese (Paneer tikka and macaroni and cheese for vegetarians).

Then it was time for the red wines. These were, in order of serving, Three Peaks Merlot 2014; Kumala Pinotage 2014; Golden Mile Shiraz 2013; and Punto Nino Cabernet Sauvignon Reserva 2010. For me, and I suspect most of the members present, the Pinotage – South Africa’s signature wine, a blend of Pinot Noir and Cinsaut – was the most interesting, closely followed by the Punto Nino, an award winning vintage from Chile. These wines were served with Cajun-spiced chicken tenders with a warm olive and cheese dip, shitake maki, grilled Moroccan prawns, miso glazed pork belly and individual bowls of shepherd’s pie (hand cut fries with aioli, shitake maki, tempura avocado, vegetable sliders and primavera pizzetas for vegetarians).

The refills kept coming (we were promised unlimited refills of all the wines and the promise was kept) and conversations grew more animated, interspersed with generous dollops of information and insight from Sommelier Rakesh and introductory comments before each wine by our ever-cheery President, Bunty (Kulbir) Singh, whose signature one-liners kept us all heartily entertained.

Many thanks to member Puneeta Chadha Khanna who liaised with the Trident to create the event, to Sommelier Rakesh Awaghade and the Trident for a beautifully orchestrated evening, to our very own SI editor Reva Singh who made the wine selection and devised the tasting (and whose company we missed because she had to be in Mumbai for a previously accepted wine dinner) and to the enthusiastic membership of The Wine Society for turning out in numbers during the crowded party season and making the evening a grand success.